Now after less than a fortnight out of a job, Donoghue is back to spearhead the ambitious East Sussex club’s drive towards the Super League.

He will succeed club legend Jacquie Agnew, who is now in overall charge of the women’s and girls’ structure at the Dripping Pan, and with whom he will now be expected to work closely.

Agnew said: “I met with John on a couple of occasions and really liked his football philosophy and his personality. He is someone who the directors felt would build on the success so far and further develop our playing style, and is someone who is very player-centric, which fits in perfectly with our ethos here.

“I think this could be a perfect fit, and I am really looking forward to working with John.”

Donoghue inherits a talented squad, which finished above his previous side for the first time in last season’s Premier League Southern.

They will be boosted by the creation of a development side, who will effectively be their reserves and will play in the Premier League Reserves division.

And equally excitingly, an under-18 side will operate for the first time, combining the best of the club’s talented former under-16s with fresh faces to form a bridge between youth football and the adult set-up.

Donoghue said: “This is an exciting project for me, and I want to help the ladies grow at the right pace. We now have a proper pathway in place with two new teams this season, which I can help support.

“The £6m ground regeneration investment will give us great facilities. It is also a unique situation that I will be working with Jacquie, who is on the board at the club, which means I will have direct access to club directors.”

The mutual respect suggests Donoghue’s appointment is a wise one. He is vastly experienced in women’s football and knows the local scene well.

He experienced a difficult interim season with Brighton, where he was appointed at short notice and dispensed with just as the club prepared to enter the next phase of its own journey towards the promised land of the Super League.

His former colleague at Brighton, their élite women’s and girls’ football manager, Tracy Doe, said Donoghue had done “an absolutely fantastic job” after stepping in “at really short notice” before the start of last season.

What is less clear is how Donoghue’s relationship with Agnew will work. It’s unknown territory for both parties, Agnew having been the women’s team’s only manager since its creation about 12 years ago.

Before the appointment was made, Agnew told Sent Her Forward that she would have ultimate responsibility for the direction of the women’s and girls’ operation at the Pan, but that the new first-team manager would “get full licence to do what they want to do”.

She told me: “The worst thing is for me to interfere in the wrong things. I am here to help them and support and guide to help make them successful.

“I’m sure there will be things that we disagree on, but ultimately I’m there just to help and support.”

What is clear, though, is that between them Agnew and Donoghue provide Lewes Ladies with a wealth of experience that is a match for almost anyone.

Donoghue, one of eight candidates for the post, and selected from a shortlist of three, boasts a cv that includes a spell as manager of Southampton Ladies at National Premier League level, coach at Southampton’s boys’ academy and manager of Bournemouth’s boys’ academy.

He also headed the girls’ academy at Worthing College.

He told Sent Her Forward he needed to know about the club’s resources and ambitions before putting himself forward for the job.

And he liked what he heard.

“Once I found out more details about the plans going forward, the exciting developments that are happening, the pathway (from youth to first team), it really appealed to me,” he said.

“And with Jacquie’s energy and forward thinking, that helped sell it.”

Donoghue says he is happy with the demaracation of job specifications and envisages a fruitful partnership with Agnew and the other coaches at Lewes.

He said: “Obviously Jacquie is the person I report to. She’s the person who’s in charge of developing football as a whole, including the infrastructure and pathway. 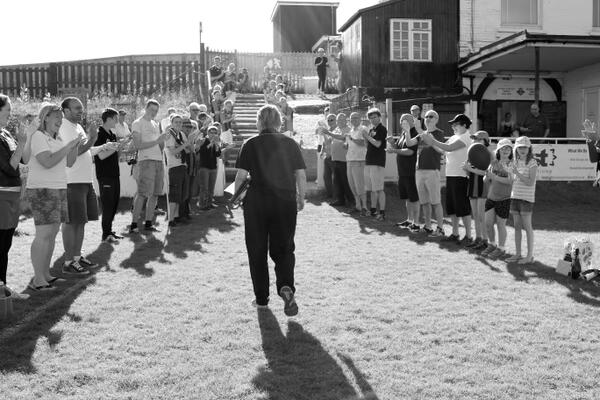 Donoghue succeeds a woman who has become a legend at Lewes, Jacquie Agnew (Photo: James Boyes)

Donoghue was impressed by the number of players who attended club trials but says he won’t pass up an opportunity to strengthen his new squad from players he identified during his time at Brighton.

“There are a couple of players going off to university and some who are not going to continue for various reasons,” he said. “It would be naive to think that we can’t strengthen in some areas.

“But when you look at how this club finished with 31 points and how they finished the season (unbeaten in their last six league games), beating Gillingham and Cardiff City during the season, it is clear they have some exceptional players here.”

He did not rule out returning to his former club for players but said he would be considering players who would fit in and enhance areas that needed strengthening.

“I wouldn’t say no if a good player came along.”

This site uses Akismet to reduce spam. Learn how your comment data is processed.